Every computer connected to the internet has an IP (or Internet Protocol) address—the address that other computers can read to figure out where to send information and where it’s coming from.  click following link to find your IP address:

Each of the different parts of your address: street, town, city, etc. help the delivery man find your house. An IP address does the same for internet traffic. If you knew the specific IP address of the server you were trying to access, you could get to a website by typing in just the IP address. This is great for computers, but it would be hard for you and I to remember all of the numbers of our favorite websites. This is why we have domain names.

An IP (Internet Protocol) address is a unique identifying string of numbers, like 216.27.61.137, given to every individual computer, server, and network on the Internet. Like a license plate is used to help identify vehicles, an IP address is used to identify and locate information online. Additionally, they allow for communication over the internet between devices and networks connected to the internet. 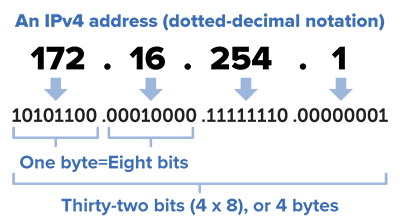 Internet Protocol version 4 (IPv4) defines an IP address as a 32-bit number. However, because of the growth of the Internet and the depletion of available IPv4 addresses, a new version of IP (IPv6), using 128 bits for the IP address, was developed in 1995, and standardized in December 1998. In July 2017, a final definition of the protocol was published.[5] IPv6 deployment has been ongoing since the mid-2000s.

The IP address space is managed globally by the Internet Assigned Numbers Authority (IANA), and by five regional Internet registries (RIRs) responsible in their designated territories for assignment to end users and local Internet registries, such as Internet service providers. IPv4 addresses have been distributed by IANA to the RIRs in blocks of approximately 16.8 million addresses each. Each ISP or private network administrator assigns an IP address to each device connected to its network. Such assignments may be on a static (fixed or permanent) or dynamic basis, depending on its software and practices.

An IPv4 address consists of four numbers, each of which contains one to three digits, with a single dot (.) separating each number or set of digits. Each of the four numbers can range from 0 to 255. Here’s an example of what an IP address might look like: 78.125.0.209. This innocuous-looking group of four numbers is the key that empowers you and me to send and retrieve data over our Internet connections, ensuring that our messages, as well as our requests for data and the data we’ve requested, will reach their correct Internet destinations. Without this numeric protocol, sending and receiving data over the World Wide Web would be impossible.

An IPv6 address consists of eight groups of four hexadecimal digits. If a group consists of four zeros, the notation can be shortened using a colon to replace the zeros.

The configuration of a static IP address depends in detail on the software or hardware installed in the computer. Computers used for the network infrastructure, such as routers and mail servers, are typically configured with static addressing, Static addresses are also sometimes convenient for locating servers inside an enterprise.

Static IP addresses are generally preferable for such uses as VOIP(Voice over Internet Protocol), online gaming, or any other purpose where users need to make it easy for other computers to locate and connect to them. Easy access can also be facilitated when using a dynamic IP address through the use of a dynamic DNS service, which enables other computers to find you even though you may be using a temporary, one-time IP address. This often entails an extra charge, however, so check with your ISP.

Dynamic IP addresses are assigned using methods such as Zeroconf for self-configuration, or by the Dynamic Host Configuration Protocol (DHCP) from a network server. The address assigned with DHCP usually has an expiration period, after which the address may be assigned to another device, or to the originally associated host if it is still powered up. A network administrator may implement a DHCP method so that the same host always receives a specific address.

DHCP is the most frequently used technology for assigning addresses. It avoids the administrative burden of assigning specific static addresses to each device on a network. It also allows devices to share the limited address space on a network if only some of them are online at a particular time. Typically, dynamic IP configuration is enabled by default in modern desktop operating systems. DHCP is not the only technology used to assign IP addresses dynamically. Dialup and some broadband networks use dynamic address features of the Point-to-Point Protocol.

In the absence or failure of static or stateful (DHCP) address configurations, an operating system may assign an IP address to a network interface using stateless auto-configuration methods, such as Zeroconf.

Address autoconfiguration
Address block 169.254.0.0/16 is defined for the special use in link-local addressing for IPv4 networks.[10] In IPv6, every interface, whether using static or dynamic address assignments, also receives a local-link address automatically in the block fe80::/10.

These addresses are only valid on the link, such as a local network segment or point-to-point connection, that a host is connected to. These addresses are not routable and like private addresses cannot be the source or destination of packets traversing the Internet.

When the link-local IPv4 address block was reserved, no standards existed for mechanisms of address autoconfiguration. Filling the void, Microsoft created an implementation that is called Automatic Private IP Addressing (APIPA). APIPA has been deployed on millions of machines and has, thus, become a de facto standard in the industry. Many years later, in May 2005, the IETF defined a formal standard for it.

Addressing conflicts
An IP address conflict occurs when two devices on the same local physical or wireless network claim to have the same IP address. A second assignment of an address generally stops the IP functionality of one or both of the devices. Many modern operating systems notify the administrator of IP address conflicts. If one of the devices is the gateway, the network will be crippled. When IP addresses are assigned by multiple people and systems with differing methods, any of them may be at fault.