Alt text (alternative text) is a word or phrase that can be inserted as an attribute in an HTML (Hypertext Markup Language) document to tell Web site viewers the nature or contents of an image. The alt text appears in a blank box that would normally contain the image.

The Alt Text refers to the description you use to describe an image just in case if someone has visual impairment, he/she will be able to know what that image is all about while listening to the screen readers. Besides, it is also another way of helping the search engines to know what is the image about. If properly implemented, it will help search engines to return your image according to the relevant search queries. 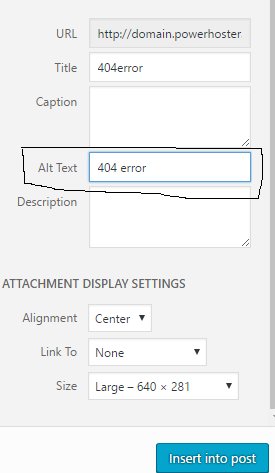 An alt attribute starts out with the character sequence alt= and then contains the alt text within quotation marks. For example, the attribute alt=”Storm Surge” might appear in the HTML image tag for a photograph of high water during a hurricane. In most browsers, hovering the pointer over an image containing an alt attribute will cause the alt text to appear within a small box beneath the pointer.

When choosing alt text, it’s important to ensure that it tells viewers as much as possible about the image, using as few words as possible. This consideration becomes increasingly important as images get physically smaller. If the alt text is too long, it might take up too much space to fit inside the image rectangle (which is the same size as the image would be if it were visible). With bullet links that have external text labels, for example, alt text would only cause clutter. In cases of that sort, the alt text can comprise a single space between the quotes (alt=” “) or the two quotes can be placed right up against each other (alt=””).

Alt attributes should always go inside image tags, even if no alt boxes are wanted. If the Web page author does not want an alt box to appear in conjunction with an image, a blank alt attribute should be inserted in the image tag to ensure that a default character sequence showing the image’s Web address will not appear when the viewer hovers the pointer over the image.